This human pathology seems to be growing in importance in the world. Perhaps it is one of the impacts of growing pressure towards more intense tribalism in the global village, predicted by Marshall McLuhan.

Apparently, progressives in the U.S. and other industrialized countries were enthralled by the arguments in philosopher John Rawls' work, notably Theory of Justice and Political Liberalism. In particular, his idea of liberal neutrality has deeply influenced the post-modern notion of equality before the law (and all of the post-modern, activist jurisprudential abuses of the 14th Amendment's "equal protection" clause). In the new definition of equality before the law, all sources of value difference derived from natural law theory are scrubbed, the reason being, in the Rawls' argument, that no one should be permitted to argue for a set of rules on the basis of values they inherit from their original position. In practice, this means that Lizzy Borden, a compulsive ax murderer, has the same vote as Mother Teresa, a saint, in deciding the rules of society. It also means Rawls unwittingly became a "useful idiot" for post-modern population control and eugenicist elements of the progressive left. For the state to enforce liberal neutrality, those who espouse traditional values will need to be taken down a peg.

And that after this is accomplished, and the brave new world begins
When all men are paid for existing and no man must pay for his sins…

[From Rudyard Kipling's 1919 poem "The Gods of the Copybook Headings"]

[With apologies to William Shakespeare:]

The coming showdown in the Supreme Court over the PPACA's individual mandate and the lack of severability of that mandate — putting the Constitutionality of the entire PPACA at risk — has progressive organizations crying foul even before the issue is officially raised in the court. According to a recent article in the Washington Post (see "Common Cause suddenly uncommonly forceful in fighting Koch Industries."),

Some recent radio spots have finally caught my attention, due to what they have in common.

Progressives have been re-engineering children's stories for decades in order to tell their side of the big picture. They argue that Aesop and the Brothers Grimm got it all wrong. Progressives come at the retelling from two different angles: (1) they don't want to offend anyone, and (2) they deny natural law. Both of these features are exemplified in the retelling of the story of the Three Little Pigs.

China recently convened a Catholic assembly in Beijing. According to the Vatican communique published by the Vatican Information Service,

Burt Lancaster's Rainmaker couldn't hold a candle to the chicanery of Senator Reid and his cronies. There were predictions as far back as early October of this year that the Senate Democratic leadership intended to concoct a tossed salad of budget-busting, power-grabbing, social engineering measures in one final push during the Lame Duck session. Even I got wind of some of it. 1

Fortunately, Senator Jim DeMint wants us to be current on the latest chicanery. This is why he has threatened to have the Omnibus bill read on the Senate floor. See "DeMint threatens to force a reading of omnibus bill."

The Federal Reserve has traditionally used open market operations (i.e., printing money, or, as the purists prefer to say, "digitizing money"1) for emergency overnight loans2 to banks that have a temporary liquidity

In the Senate's haste to draft a health-care reform bill, it seems the Reid crowd left out some final boilerplate, what's known in the legal biz as "a severability clause." Oops! See David Caltron's excellent article in the American Spectator, "Of Severability and Sins of Omission." See, also, a subtly different, and a tad feistier, position taken at the "Viva La Revolucion!" blog at Townhall.com, "The State of Obamacare After Judge Hudson's Decision." 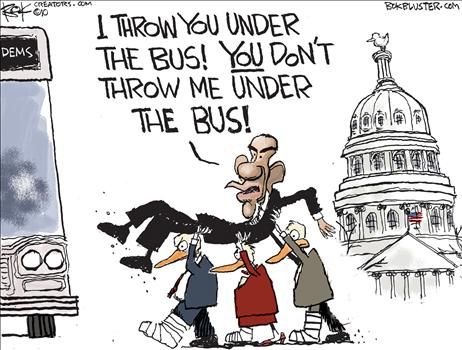 I'm a retired priest. I continue to serve daily Mass, administer the sacraments and give pastoral care. A priest who retains his calling only retires completely when he is no longer physically or mentally able to hear confessions.